In the ranks of Turkish team of Fenerbahce Istanbul appeared a young basketball player from Bosnia and Herzegovina, Feđa Čukle, who will be training with the first squad of this Turkish giant at their Training Camp, and will try to draw the attention of coach Željko Obradović.
Besides Čukle, some other players were invited to the Training Camp, as Serbian A-National Teamer Vladimir Štimac, Carl Engstrom, Milan Ačimović, Burak Eslik, Ivan Buva and Oguz Savas.
Also, most regular basketball players of Fenerbahce appeared as well, i.e. those who will not participate in the upcoming World Cup. Among them, Bobby Dixon, Joffrey Lauvergne, Nikola Kalinić, Jan Vesely and Derrick Williams stand out.
Feđa Čukle is a 16-year-old basketball player, who plays as point guard, and comes originally from Konjic, where he started his basketball career. After that, on recommendation of his former coach, he cam to the Club Igman Burch, where he plays for youth categories and he was invited to play for the youth national teams of Bosnia and Herzegovina as well.
After good games during the „6th of April Tournament“, he was spotted by our basketball expert Oliver Stanković, who took him to Fenerbahce, where he is currently training with the first squad of this team, under the supervision of the best European coach Željko Obradović 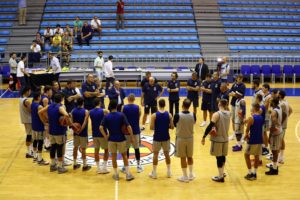